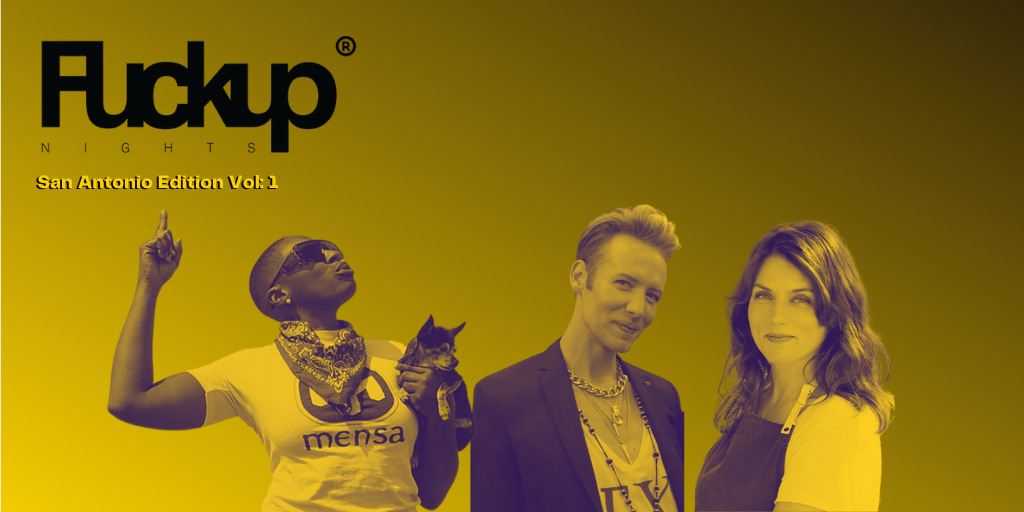 If you found this event page, you are personally invited to join us for San Antonio's inaugural FuckUp Night, benefiting the AM Project. Afterparty with DJ Catwalk- masks and social-distancing required for all aspects of in-person event!

Fuckup Nights is a global movement and event series that shares stories of professional failure.

Featured in 100’s of media outlets such as Forbes, New Yorker, Huffington Post and the BBC, every month, in events across the globe, we convince 3-4 people to get up in front of a room full of strangers to share their own professional fuckup using 10 slides and seven minutes each. #sharethefailure #fuckupnights #fuckupnightssatx

Fuckup Nights believes that having difficult conversations is a positive step towards well-being and creating a less ego-driven world. We learn more from failure than from success stories. The events celebrate trying rather than stigmatizing failure, they are FUN and great for networking.

Featured in 100’s of media outlets such as Forbes, New Yorker, Huffington Post and the BBC. Fuckup Nights work with partners such as Unilever, Roche, Airbus and hundreds more to strengthen cultures of resilience and innovation.

In the hands of Tim McDiarmid, even the most rustic vegetables transform into alluring, delicious and sexy creations. This world traveler, Canadian by birth and San Antonian by choice, produces culinary and artistic creations that fit perfectly with any type of event or business. Her company, Tim the Girl, combines bespoke catering and event planning. In 2016 McDiarmid launched The Good Kind, a modern market and cafe, which builds on Tim the Girl’s vision of providing a broader base of the San Antonio community with food that is clean, nourishing, sustainable and delicious.

Jessica Conrad brings a celebratory energy to any environment she inhabits, is a world-traveling superconnector, and co-producer of FuckUp Nights San Antonio.

An 8-year Air Force veteran (having served 2 tours in Iraq and Afghanistan), Jessica developed extreme attention to detail, a proactive and observant nature, and a passionate advocacy for her patients and fellow airmen. All these skills and more, she transfers into her current work connecting people to the perfect home and delicious culinary experiences as a realtor and part-time chef, respectively.

When not assisting her clients or feeding her communities, Jessica enjoys spending time with her 13 y/o chihuahua Moebius, entertaining friends, traveling and relaxing with her mother Kim, father Ricky, and younger brother Wesley.

San Antonio native and provocateur, Leighton W. comes from a varied background. From fashion to ballet and on-air talent for several daytime shows, he is perhaps most well known for creating the Leighton W. Couture brand that eventually became one the few American fashion brands accepted by the Parisienne Syndicale de Couture. Now, Leighton moves beyond these outlets to create something new with a focus on provoking thought and expanding his own mind with the assistance of those he looks up to.

$50 Giftcard to The Good Kind

10-Pack of Yoga with MBS Fitness

Select a ticket and proceed to registration details